You are here: Home / Articles / Contractor Humberto Lopes – Making It, The Hard Way

Humberto Lopes scoffs at the old adage “It takes money to make money.” He started a company, H.L. General Contractors, “with nothing” —  just a hand truck and a box of tools, and parlayed that into a booming business with a dozen employees, four trucks and two garages. Humberto is 23 years old.

Lopes was always driven. He began working at a neighborhood bodega when he was nine; at 11, he learned carpentry. He remembers many of his classmates at John Jay High School hanging out on street corners or becoming involved with drugs, but these pastimes held no interest for him. He opened his contracting business right after graduation.

Lopes modestly denies any special talents which have made him a successful businessman; he feels anyone with drive can achieve. “I can’t understand why people my age don’t achieve — if I did it, why can’t they?” He adds that his generation will run the country one day and must prove itself worthy, or the country will be in trouble.

When pressed for more tangible reasons for his success, Lopes admits he has very high standards. He is scrupulously honest because “if you try to fool a customer, you’re the only one who looks bad.” He proudly notes that he has never walked out on a job and never will, citing cases of contractors who get frustrated by a client and walk out. He knows that he cannot possibly satisfy everybody, but he always does a complete, thoroughly competent job. He also credits his mother, who pushed him, and his girlfriend, Jeanette Alfonso, who is the office manager.

When Lopes first started out, he sought investors to launch the business. He was turned down everywhere by people telling him he was too young, that it was the wrong time for construction, that he should get experience by working for someone else.

But Lopes wanted to be out on his own and didn’t think he should wait just because he was young. The negative response had a positive outcome; “The people who pushed me down gave me strength.” The more Lopes was told ‘no’, the more he knew he had to succeed. Some of the same people who dismissed Lopes six years ago are now trying to entice him into a partnership, but he is not interested.

Lopes put all the money he made back into the business; “Every penny was spent wisely.” His first big break was renovating a McDonald’s in Manhattan — he carried his tools and materials on a hand truck, traveling by subway.

Lopes had a hard time even getting materials but was able to establish lines of credit at Pintchik, Ranieri & Son, an Strober Brothers — he still uses these suppliers.

In 1983, he bought his first truck at an auction, which led directly to a job. The truck had been owned by a contractor and still said “roofing”‘ on one side. The other side said “Humb” which is short for his first name, Humberto.

Someone saw the truck while he was working another job and gave him a roofing job; in just three weeks, he had made back the  entire investment in the truck. Six months later, Lopes incorporated. He would have done so sooner, but he had to wait until he was 18.

Lopes looks to Donald Trump as a role model, calling him “a young man who didn’t step on anyone to grow. He feels that Trump is too narrowly focused on the rich now; Lopez wants to help the poor and middle class. “I want to help people coming up — I don’t want to be up there by myself.” To that end, he trains his workers to acquire all-around skills — “You don’t go anywhere in life otherwise.”

Lopes invests in Carroll Gardens and Red Hook because “a neighborhood can only go so low, then it has to come back.” He bought his first garage in a rubble-strewn section of Red Hook in 1986 and has made it known to drug dealers that he will net tolerate their presence on his property. The improvements he has made at the garage have inspired others on the street to fix up their properties.

Lopes is guarded about his future plans but promises that he will give back what he got out. “People will look up to me,” he confidently asserts. “I am going to make a difference.” People who know Humberto Lopes know he always speaks the truth. 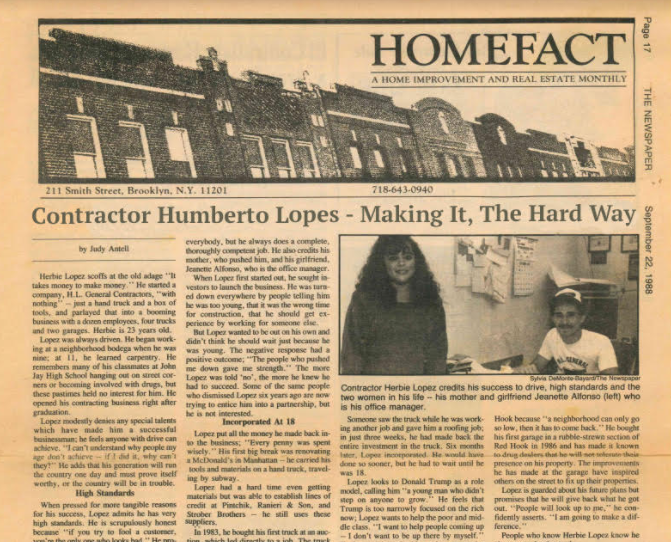